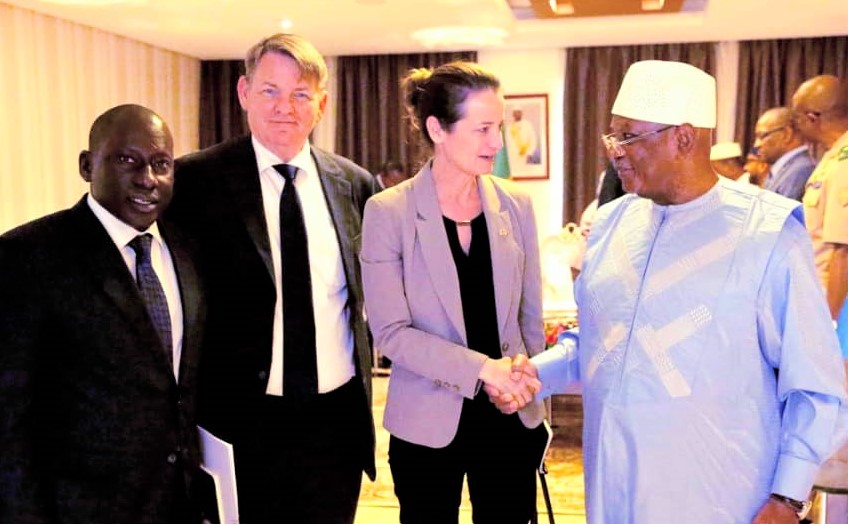 In a high-level visit Acting Assistant Secretary of Defense for International Security Affairs Kathryn Wheelbarger visited Mali June 2-4. On June 4, she and Ambassador Dennis Hankins met with Malian President Ibrahim Boubacar Keita (IBK) at the presidential palace in Koulouba, Bamako. Their discussions focused on peace and security in Mali.

Speaking with Malian Broadcasting Company, ORTM, after the meeting, the delegation highlighted U.S. security assistance to Mali. “The U.S. support for Mali is already substantial in terms of direct assistance, and augmented with contributions to the UN, Barkhane, and G5 Sahel,” said Ambassador Hankins. He added that the meeting allowed all the participants to confirm that U.S. initiatives are well aligned with the priorities of the Malian government, and that international coordination is ongoing to address the significant challenges in Mali and the Sahel.

During the three-day visit, the delegation met with Malian authorities and other international partners engaged in Mali, including the United Mission in Mali (MINUSMA), Barkhane, and G5 Sahel. The delegation also had a successful meeting with Prime Minister Boubou Cissé,  who Wheelbarger congratulated for his clear vision of the issues.

Since the establishment of MINUSMA in 2013, the U.S. government has granted annually over $ 500 million in support to Mali, both through the UN and in support for bilateral development projects in diverse sectors, such as health, agriculture, education, justice, and social cohesion. The diverse U.S. activities focused on cooperation to restore peace and stability, and to improve the quality of life for millions of Malians.