Home Home / News & Events / Ambassador Dennis B. Hankins Highlights the Enduring and Rich Partnership between the U.S. and Mali at the Annual 4th of July Celebration in Bamako 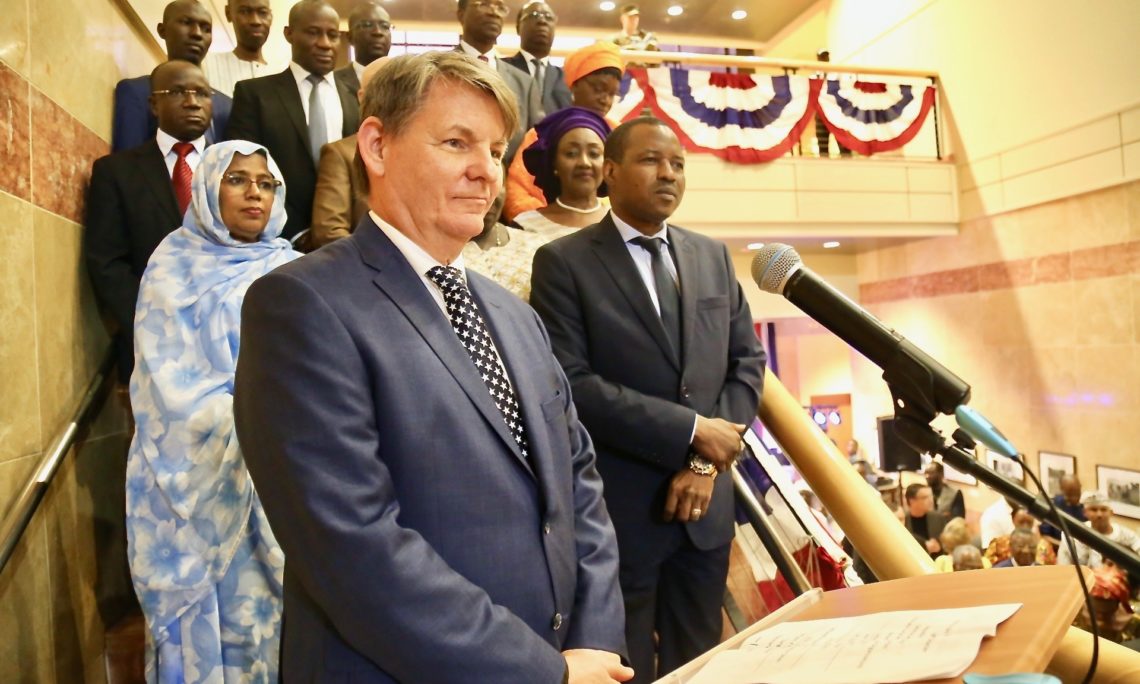 July 3, 2019 – U.S. Ambassador Dennis B. Hankins and Mrs. Mira Hankins hosted the U.S. Embassy’s annual Independence Day Reception in Bamako. In his remarks, Ambassador Hankins dedicated this year’s 4th of July celebration to the first U.S. Chief of Mission to Mali Mr. John Gunther Dean who passed away on June 6, 2019.

Ambassador Hankins highlighted Mr. Dean’s long life and distinguished accomplishments as Charge d’Affaires in Mali from 1960 to 1961.  Hankins recounted how Mr. Dean’s work with the new country assisted in establishing the foundations of governance in the new republic, after its independence from France, and the warm friendship he enjoyed with Mali’s first President Mr. Modibo Keita.

Additionally, Ambassador Hankins recounted how the United States was also the first nation to establish a consulate in Bamako, and first foreign mission to offer development and government assistance to the new country. Hankins described how the United States also opened the first English language-teaching center in Bamako, adding that President Modibo Keita and his wife were among the center’s first English as Second Language (ESL) students.

To commemorate this 59th year of the long and enduring friendship between the two countries, Ambassador Hankins presented framed copies of the first diplomatic correspondence between the United States and Mali, including a letter between U.S. President Dwight D. Eisenhower and President Modibo Keita.  Mr. Fidèle Diarra, Director of the Bureau of the Americas for the Malian Ministry of Foreign Affairs, accepted the gift on behalf of the Government of Mali.

Minister for Malians Living Abroad Mr. Amadou Koita spoke on behalf of the Government of Mali thanking the United States for supporting the peace and stability of Mali and for building private sector investment to improve economic development. Mr. Koita also thanked the United States for supporting the renewal of the UN Peacekeeping mandate in Mali.

In his remarks, Ambassador Hankins highlighted the successful partnership between the two governments particularly in the fields of health and nutrition, “Together the United States and Mali have achieved progress and concrete results, particularly in reducing the cases of malaria by 60% and improving the nutrition of young children in Mali, reducing the incidence of stunting by 30%.”

At the event, celebrating the 243rd Independence Day of the United States, over 200 guests from the Malian, American and International community enjoyed live music featuring three bands comprised of Americans and Malians from the U.S. Mission community.  Ambassador Hankins thanked the U.S. companies Radisson, BraMali, Coca Cola, and Manutention Africaine Mali, and Caterpillar for sponsoring the event.