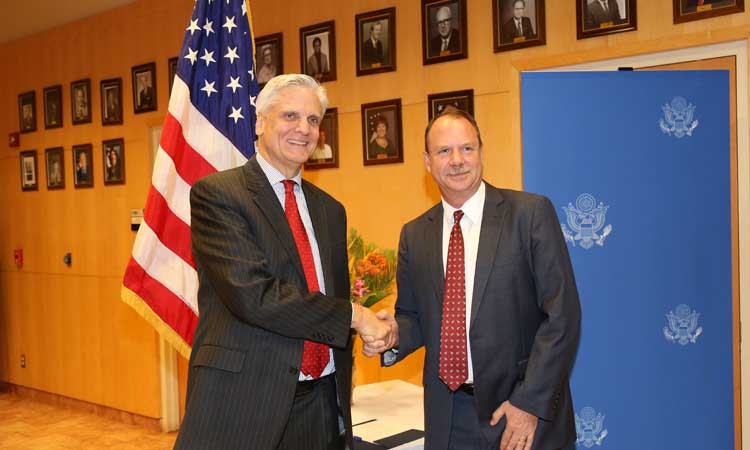 U.S. Ambassador Paul Folmsbee bid a fond farewell to Mali on November 19, 2018 after three and a half years, and Mr. Gregory L. Garland assumed his duties as the U.S. Chargé d’Affaires at the Mission in Bamako.

Chargé d’Affaires Garland arrived in Mali as the Deputy Chief of Mission (DCM) for Embassy Bamako in September 2017.  Mr. Garland’s most recent posting was as the U.S. Representative to Guinea-Bissau (2014-2017).

Previously Mr. Garland served as the DCM in Praia, Cape Verde, and as Public Affairs Officer in Conakry, Guinea. His Washington assignments have included a posting at the Office of the Secretary of Defense; Research Fellow at the National Defense Intelligence College; and Media and Outreach Coordinator in the Department of State’s Bureau of African Affairs. He has held positions in Mozambique, Angola, Guinea, Mexico, Poland, and on the staffs of the former Board for International Broadcasting, and the Jacksonville, Florida International Relations and Marketing Commission.

Mr. Garland is on the faculty of the Florida Chautauqua Association, where he has participated as a speaker and performer since 2009, including impersonations of Mark Twain and William Jennings Bryan.  Originally from Lakeland, Florida, he has a B.A. from Duke University, an M.A. from the University of North Carolina at Chapel Hill, and a J.D. from California Western School of Law. He is married and has two daughters.