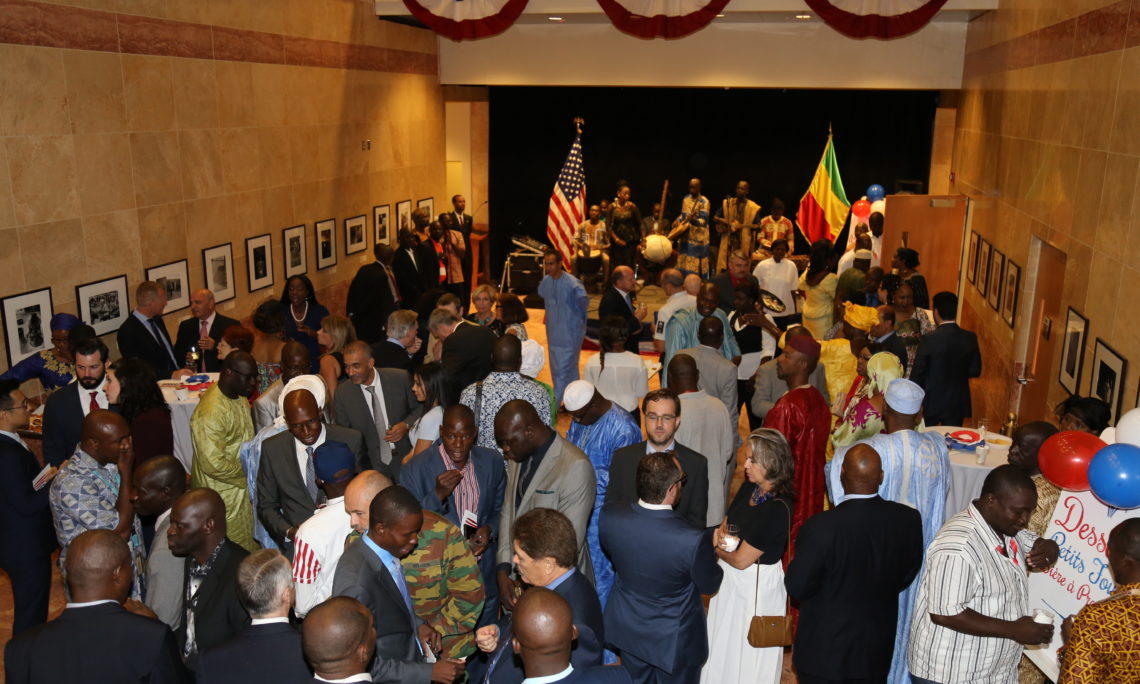 I am so pleased that you have come to share in our Independence Day celebration today.  Every year we invite our special friends to celebrate the founding of America.

And first, I want to express our sincere thanks to Mr. Damien Baron of BraMali company, who ensured that no one goes thirsty.  Every year BraMali provides drinks for this event.   I would also like to thank Mr. Henri Béderida of Manutention Africaine Mali, who ensured that the Groupe Sambalagnon Djicoroni-Para was here to share this wonderful music.

And as I look out and see all of these familiar faces, I’m reminded tonight that the U.S. partnership with Mali runs deep and wide.  In fact since I stood before you last year, our partnership in the areas of education, agriculture, commerce, and security has only deepened.

The United States continues to be a steadfast partner in security, and we recognize that strong and capable Malian security services are a critical component of a strong and independent Malian state.  Since 2012, the United States has spent more than $1 billion to help Mali build a security service that can both address immediate threats and preserve the liberties of the Malian people.  We will continue these investments in partnership with Mali, France, the European Union,  the United Nations and others.  The United States is a strong supporter of the G5 Force.

But capable security forces are only one component of Mali’s success.  Through USAID, the American people are supporting the stabilization of conflict-affected areas, improving the effectiveness and responsiveness of Mali’s government institutions, building resilience in economically vulnerable households, and advancing overall socioeconomic well-being.

One area in which the United States and Mali share a particularly successful partnership is in agriculture.  Through the United States’ Feed the Future Initiative, we are tackling poverty and malnutrition. In partnership with the private sector, local communities, and the Government of Mali, we have helped more than 165,000 farmers increase agricultural productivity and increase the value of their agricultural sales.  Mali’s agriculture sector has tremendous potential, and we are excited to be a part of its growth.

Our partnership is also strong in health.  When we partnered with the Malian Ministry of Health seven years ago to fight the scourge of Malaria we knew this was going to be a tough fight.  But seven years after the President’s Malaria Initiative, child mortality from Malaria has decreased by fifty percent.  This is incredible news.

We also work every day to increase access to education, which is the single most important investment a country can make in its people.  Today education is under threat in the North and Center of the country.  If anything illustrates the urgent need for Peace in Mali, it is the growing population of young people who are growing up without the skills to participate in the economy.  Without hope or opportunity, these youth may be tempted to turn to destructive activities, thus reinforcing the cycle of violence.

The United States has supported Mali’s development for over 55 years, and we are committed to continue our development assistance, for the benefit of both our peoples.  But none of this investment – in security or development – will bear fruit unless the Malian people come together to resolve the question of Mali’s territorial integrity.  Mali cannot be strong and prosperous as long as it is divided, which is why the United States continues to be a strong proponent of implementation of the 2015 Algiers Accord.  We stand with all of the signatories to the agreement, and will continue to work with all to achieve progress.

We are in a common fight:  against terrorism, yes, but also against disease, illiteracy and poverty.  We are fighting for freedom of expression, human rights, shared prosperity and economic development.   Mali and the United States are fellow democracies, and change is normal in democracies.  What is key is that our values do not change in one election.  The new administration understands how important Mali is.  Our relationship in areas of common interest including security and economic interests will just grow stronger.

Each year we use this occasion to remember that, more than anything else, the United States is a country founded upon a set of revolutionary ideas.  Our country was not built by or for a particular group of people, but rather it was an experiment to see how people of different faiths, ethnicities, and political points of view could live together in peace and prosperity.

The founders of our country courageously followed their belief that such an experiment could succeed when they signed the Declaration of Independence on July 4, 1776.  The words are as true today as they were 241 years ago: “All men are created equal, that they are endowed by their Creator with certain unalienable Rights, that among these are Life, Liberty and the pursuit of Happiness.”

I should add: All men means all men and women are created equal, and with equal rights!

Our job as a nation is to continue building an open and free society, based on tolerance for cultural and ideological differences, a society that values and derives strength from diversity, so that we may prosper in times of adversity.

The rights enumerated in our Declaration of Independence have guided our nation throughout the decades, no matter which political party holds power in the White House or Congress.  Every day, American rights and beliefs are tested but this is what our democracy is all about.

Mali faces many challenges in the coming months and years and the United States stands shoulder to shoulder with the Malian people.  Certainly one of the biggest challenges is the implementation of the Algiers Accord.  While I salute all the parties for the progress that has been made, it has not been enough.  I encourage all three signatories to embrace the accord and move forward with real governance that will help the population.  Schools closed need to be reopened. Commitments to security need to be honored.  The Kidal airport needs to reopen and the leaders in Kidal and the Government need to keep it open.  Economic opportunities need to be pursued. The list goes on and on.   Let’s all get behind this effort and make a difference.  We pledge our support for peace and unity Mali. And as you work together for the future of Mali, you will have no stronger partner than the United States of America.

Thank you all very much for being here today.  We are so happy you can share this special day with us.