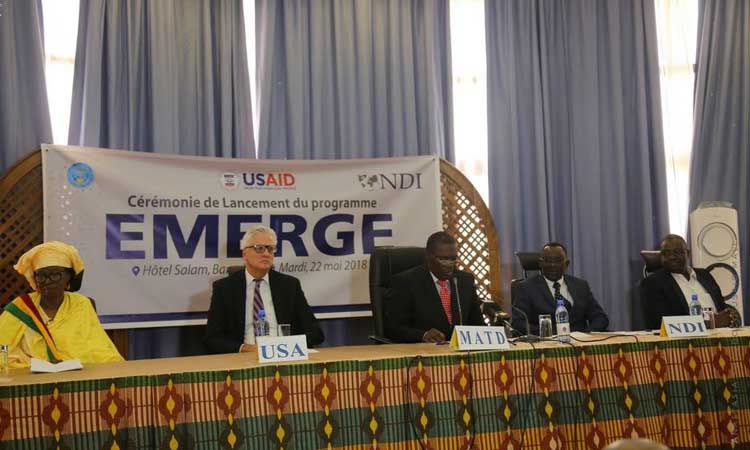 Dear distinguished guests, thank you for this opportunity to discuss the upcoming elections.  The United States has a deep respect and appreciation for all the work you are doing to further the electoral process, and your commitment to the peace process and stability in Mali.  Transparent and credible elections are the bedrock of any society committed to progress and stability.

Thus, it is an honor to join you this morning to launch the program Empowering Malians through Election, Reform, and Governance Efforts (EMERGE).

I will highlight the United States’ support for the Government of Mali and its efforts to organize transparent and inclusive presidential elections in July and local and regional elections in the coming year.

I agree with the Minister’s characterization that these elections will shape the future of Mali.  It is crucial that they are free and fair, and that the Malian people have confidence in the results.  To help make the Malian government’s public commitment to credible elections a reality, the United States through USAID, and with our international partners in the UN Development Program (UNDP) and MINUSMA is providing support to assure that this year’s elections are well organized and credible.

Specifically, the United States through the EMERGE program is providing six million dollars to assist with:

Transparency and integrity in election management include respect for the freedom of speech and the spectrum of opinions.  To exercise their right to vote freely, all citizens –including those from traditionally marginalized groups –should understand the main issues at stake on Election Day, as well as the mechanics of the voting process.

This is why a critical component of our EMERGE program involves assistance to the Government to provide access to information for all Malians.

But let us be clear, no amount of foreign aid or our assistance by itself can guarantee free and fair elections.  International and bilateral assistance can only assist with the Government’s efforts to assure that the electoral process is transparent.

To assure credible elections, all Malians must feel free to speak up.  The government, law enforcement bodies, and the judiciary – must all take appropriate actions to foster a climate in which the Malian people are able to freely express their will and need to obtain information before and after they enter the voting booths for the presidential election on July 29, and for regional and local elections afterwards.

For free and fair elections to take place, the government must continue to create a climate in which media and civil society are free, independent, and unfettered.  Malians must have the opportunity to participate in their future and have faith in their leaders.

EMERGE is a two-year program sponsored by USAID and implemented by the National Democratic Institute (NDI), in partnership with credible national structures, this program will support the Malian electoral process by:

Let me note that there are many different examples of how democracy works in practice around the world.  Naturally, history, culture, and tradition determine the structure of each country’s democracy.  For example, federalism in Germany isn’t the same as the parliamentary governance in the United Kingdom.   And, the centralized, semi-presidential system of Senegal isn’t the same as the decentralized   democracy that features strong parties in South Africa.

Rightly so, you in Mali are in the process of evolving and distinguishing a democratic structure and practices that reflect your values and traditions.

Voting is about having a voice.  The United States sees a bright future for Mali, but we are aware of the multiple challenges surrounding this year’s electoral process. We applaud the work that is being done to assure that voters are allowed to express themselves freely both individually and through the media and that they have access voter ID cards and ultimately to the polls.

The United States is proud of our long-standing and robust partnership with Malian civil society, including women’s organizations, media and political parties.

We will as always stand by you to enhance citizen engagement and transparency in these electoral processes.

To conclude, I would like to recognize the government of Mali, especially the Minister of Territorial Administration and Decentralization and all national stakeholders involved for their commitment to ensure transparent and inclusive electoral process.

Finally, I assure all actors involved in this process that the government of the United States of America will continue its support to Mali’s efforts, as credible, inclusive and transparent elections are vital for Mali’s peace and stability.