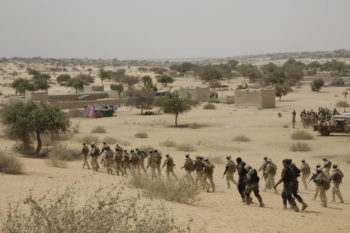 In this March 7, 2015, file photo, Chadian troops and Nigerian special forces participate in the Flintlock exercises with the U.S. military and its Western partners in Mao, Chad. The Pentagon told The Associated Press on Oct. 27, 2017, that there is no truth to claims in a viral story that Sgt. La David Johnson betrayed his fellow soldiers in an ambush that killed him and three of his comrades in Niger earlier this month. (AP Photo/Jerome Delay, File)

Site officiel de l'ambassade des États-Unis au Mali. External links to other Internet sites should not be construed as an endorsement of the views or privacy policies contained therein.