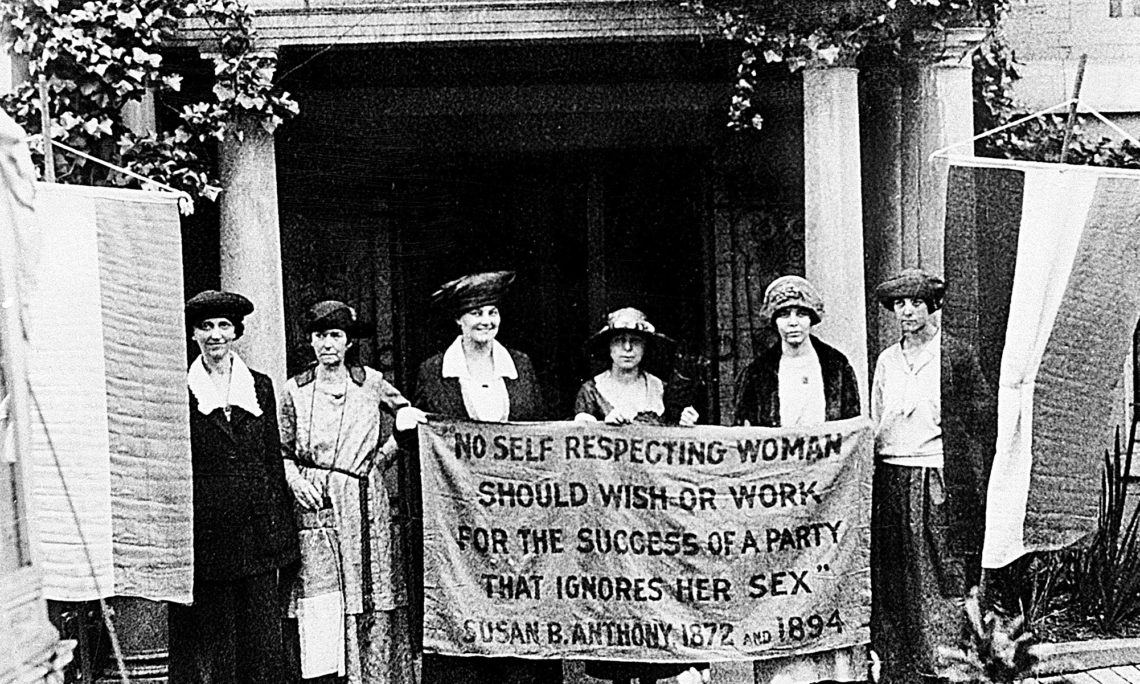 Chairwoman Alice Paul, second from left, and officers of the National Woman's Party hold a banner with a Susan B. Anthony quote in front of the NWP headquarters in Washington, D.C., June 1920. The suffragettes are ready for the G.O.P. convention to seek support for the ratification of the 19th Amen

Women have influenced and advanced every facet of American life and culture.  The strength, ingenuity, and spirit of our female leaders, innovators, and pioneers shape our Nation’s character, government, industry, families, and communities.  During Women’s History Month, we honor the women who have changed our Nation and the world, and we reaffirm our commitment to supporting the next generation of female trailblazers and dreamers as they carry forward this distinguished legacy.

This year marks the centennial anniversary of the ratification of the 19th Amendment to the Constitution, securing the right to vote for women.  This milestone in our country was made possible by the devotion, leadership, and perseverance of pioneers like Elizabeth Cady Stanton and Susan B. Anthony.  The ratification of the 19th Amendment enabled women to finally have their voices counted in voting booths, paving the way for greater female participation in all levels of government.  Heroes emerged like Frances Perkins, who, as Secretary of Labor, was the first woman to hold a cabinet-level position in the Federal Government, and Clare Boothe Luce, an influential journalist, playwright, Congresswoman, and the first woman appointed to a major ambassadorial post abroad.

Throughout our history, women have also been pioneers in fields like science, medicine, and engineering.  Bessie Coleman, the world’s first civilian licensed African-American pilot, and Marie Luhring, the first female truck designer, changed the way we think about aviation and transportation.  Saint Katharine Drexel selflessly served those in need and left an indelible mark on nursing and education.  NASA mathematician Katherine Johnson, who passed away just a few days ago, was behind some of the brilliant work that made possible the first manned spaceflights by United States astronauts.  And just last year, two brave American astronauts, Flight Engineers Christina Koch and Jessica Meir, made history by conducting the first all-female spacewalk outside of the International Space Station.

My Administration is committed to empowering all women across the Nation and around the world to continue pursuing their dreams and lifting humanity to new heights.  As President, I have championed policies that create economic prosperity and opportunity, enabling women to thrive as workers, parents, consumers, innovators, entrepreneurs, and investors.  In 2019, women comprised 71 percent of the net increase in employment, the female unemployment rate reached near historic lows, and women for the first time made up the majority of the college-educated labor force.  I have also signed into law legislation securing historic levels of funding for child care so that both women and men can better provide for their families, secure in the knowledge that their children are being well-cared for.  In addition, we secured the first tax credit for employers who offer paid family leave for those earning $72,000 or less and doubled the child tax credit, benefitting nearly 40 million American families, who received an average of $2,200 in 2019.  In December 2019, I was also pleased to sign legislation providing for 12 weeks of paid parental leave for all Federal employees.  To drive this effort further, I have also called on the Congress to pass a nationwide paid family leave program.

On the international front, last year I signed a National Security Presidential Memorandum to direct my Administration to prioritize global women’s economic empowerment through the first ever whole-of-government effort dedicated to this issue:  the Women’s Global Development and Prosperity (W-GDP) Initiative.  To date, W-GDP has reached 12 million women through United States Government programs and partnerships, with a goal of reaching 50 million women by 2025.  W-GDP’s efforts help secure a place for women to thrive and to lead their families, communities, and nations into new arenas of excellence.

This month, we pause as a Nation to pay tribute to the women who strengthen and enrich our society through civic action, devotion to family, and tireless dedication to community, innovation, peace, and prosperity.  We pledge also to continue fighting for the further advancement of women in our society and around the globe, living up to the promise of our Nation’s founding.

NOW, THEREFORE, I, DONALD J. TRUMP, President of the United States of America, by virtue of the authority vested in me by the Constitution and the laws of the United States, do hereby proclaim March 2020 as Women’s History Month.  I call upon all Americans to observe this month and to celebrate International Women’s Day on March 8, 2020, with appropriate programs, ceremonies, and activities.

IN WITNESS WHEREOF, I have hereunto set my hand this
twenty-eighth day of February, in the year of our Lord two thousand twenty, and of the Independence of the United States of America the two hundred and forty-fourth.