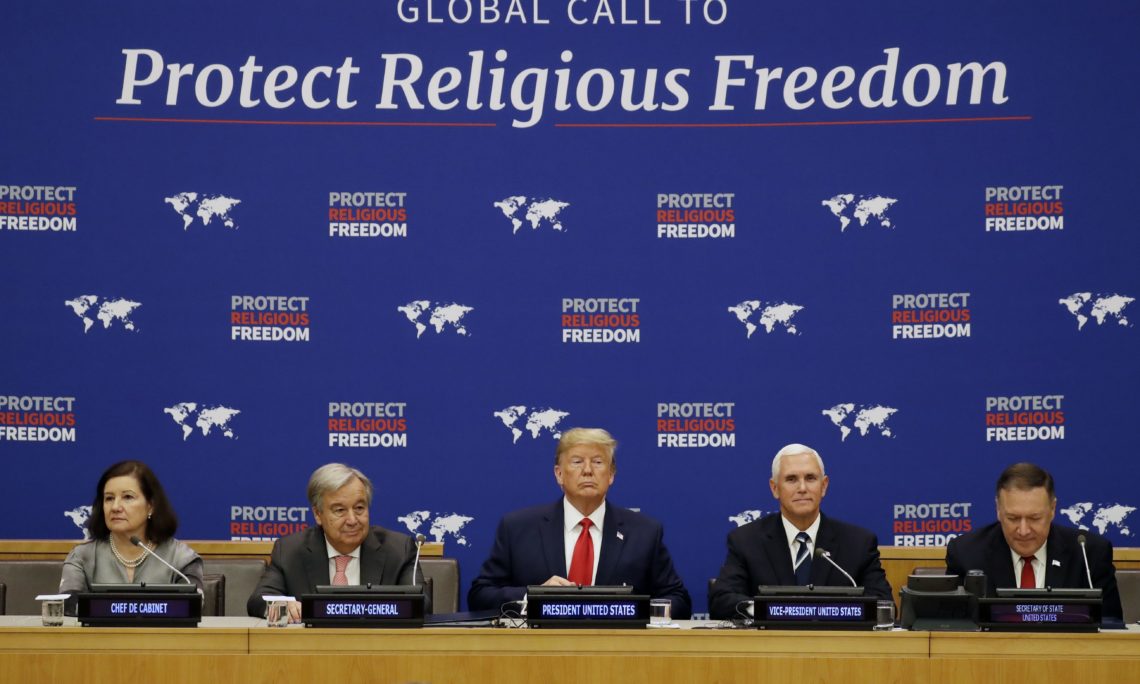 I want to thank Vice President Pence for the outstanding job he’s doing.  He’s been a fantastic and valuable representative of our country.

Likewise, Secretary Mike Pompeo, Ambassador Kelly Craft, Secretary Ross, Secretary Mnuchin, Ambassador Sam Brownback all for joining us today.  And we have other representatives of our Cabinet and the administration in the room.  We’ve done a lot.

The Johnson Amendment doesn’t get spoken about enough, but I’m very proud to say that we’ve obliterated the Johnson Amendment within our country so that now we can listen to the people that we want to listen to — religious leaders — without recrimination against them.  It’s a very important thing, and I said that at the beginning and I say it now: It’s something I’m very proud of.

We’re also grateful that U.N. Secretary-General António Guterres could be here, along with so many of his friends and my friends — world leaders.  I’ve gotten to know a lot of them, and I would imagine you know all of them.  I would imagine.  If you don’t, you’re not doing your job.  (Laughter.)

And also, I want to thank my daughter Ivanka for being here.  She works so hard on all of the things that are very important to the people in this room.  So, thank you, Ivanka, for being here.  (Applause.)

The United States is founded on the principle that our rights do not come from government; they come from God.  This immortal truth is proclaimed in our Declaration of Independence and enshrined in the First Amendment to our Constitution’s Bill of Rights.  Our Founders understood that no right is more fundamental to a peaceful, prosperous, and virtuous society than the right to follow one’s religious convictions.

Regrettably, the religious freedom enjoyed by American citizens is rare in the world.  Approximately 80 percent of the world’s population live in countries where religious liberty is threatened, restricted, or even banned.  And when I heard that number, I said, “Please go back and check it because it can’t possibly be correct.”  And, sadly, it was.  Eighty percent.

As we speak, Jews, Christians, Muslims, Buddhists, Hindus, Sikhs, Yazidis, and many other people of faith are being jailed, sanctioned, tortured, and even murdered, often at the hands of their own government, simply for expressing their deeply held religious beliefs.  So hard to believe.

Today, with one clear voice, the United States of America calls upon the nations of the world to end religious persecution.  (Applause.)

To stop the crimes against people of faith, release prisoners of conscience, repeal laws restricting freedom of religion and belief, protect the vulnerable, the defenseless, and the oppressed, America stands with believers in every country who ask only for the freedom to live according to the faith that is within their own hearts.

As President, protecting religious freedom is one of my highest priorities and always has been.  Last year, our Secretary of State, Mike Pompeo, hosted the first-ever Ministerial to Advance International Religious Freedom.

In this year’s ministerial, Secretary Pompeo announced plans to create the International Religious Freedom Alliance — an alliance of likeminded nations devoted to confronting religious persecution all around the world.

I’ve appointed a special envoy to monitor and combat anti-Semitism.  We’re standing up for almost 250 million Christians around the world who are persecuted for their faith.  It is estimated that 11 Christians are killed every day for the following — I mean, just think of this: Eleven Christians a day, for following the teachings of Christ.  Who would even think that’s possible in this day and age?  Who would think it’s possible?

With us today is Pastor Andrew Brunson, who was imprisoned in Turkey for a long period of time.  Last year, my administration was thrilled to bring him back home after a very short and respectful negotiation with a very strong man — and a man who has become a friend of mine, fortunately — President Erdoğan of Turkey.

I called the President, and I said, “He’s an innocent man.”  They’ve been trying to get Andrew out for a long time — previous administration.  I don’t think they tried too hard, unfortunately.

We did a good job with that negotiation, Andrew.  You got back.  It wasn’t easy.  It wasn’t pretty.  But you got back.  And we’re proud of you.  You have a great family.  And the love — when Andrew came back, the love from so many people, it was — actually, I hadn’t seen anything quite like it.

So, congratulations.  And I understand you’re doing fantastic work with your family.  Thank you very much.  Thank you, Andrew.  (Applause.)

In July, I met with survivors of religious persecution at the White House.  And we’re honored that many of them could be here today as well.  Some of these individuals suffered as a result of state-sponsored persecution; others, at the hands of terrorists and criminals.  No matter the case, America will always be a voice for victims of religious persecution everywhere.  No matter where you go, you have a place in the United States of America.  Could I ask those folks to stand up, please?  Please, stand up.  (Applause.)  Thank you.  Thank you very much.

In recent times, the world has also witnessed devastating acts of violence in sacred places of worship.  In 2016, an 85-year-old Catholic priest was viciously killed while celebrating mass in Normandy, France.  In the past year, the United States endured horrifying anti-Semitic attacks against Jewish Americans at synagogues in Pennsylvania and California.  In March, Muslims praying with their families were sadistically murdered in New Zealand.  On Easter Sunday this year, terrorists bombed Christian churches in Sri Lanka, killing hundreds of faithful worshippers.  Who would believe this is even possible?

These evil attacks are a wound on all humanity.  We must all work together to protect communities of every faith.  We’re also urging every nation to increase the prosecution and punishment of crimes against religious communities.  There can be no greater crime than that.  This includes measures to prevent the intentional destruction of religious sites and relics.  Today, the Trump administration will dedicate an additional $25 million to protect religious freedom and religious sites and relics.

We’re also pleased to be joined today by many of the partners from the business community, as we announce a very critical initiative.

The United States is forming a coalition of U.S. businesses for the protection of religious freedom.  This is the first time this has been done.  This initiative will encourage the private sector to protect people of all faiths in the workplace.  And the private sector has brilliant leadership.  And that’s why some of the people in this room are among the most successful men and women on Earth.  They know how things get done and they know how to take care of things.  And they’re with us now for the first time, to this extent.  First time, ever.  And we’re really honored to have you in the room.  Great business leaders, great people of strength.

Too often, people in positions of power preach diversity while silencing, shunning, or censoring the faithful.  True tolerance means respecting the right of all people to express their deeply held religious beliefs.

Before I conclude, I want to once again thank all of the survivors in the room for their courage and resilience.  You’re an inspiration to the world.  You remind us that no force on Earth is stronger than the faith of religious believers.  The United States of America will forever remain at your side and the side of all who seek religious freedom.

Today, I ask all nations to join us in this urgent moral duty.  We ask the governments of the world to honor the eternal right of every person to follow their conscience, live by their faith, and give glory to God.  The United States has a vital role in this critical mission.

Secretary-General Guterres will now share a few words on the U.N’s efforts to promote religious liberty for all.  And he has been a champion of exactly what we’re in this room for.

So I want to thank everybody for being here.  God bless you.  God bless the faithful.  And God bless America.  Thank you very much.  (Applause.)  Thank you.