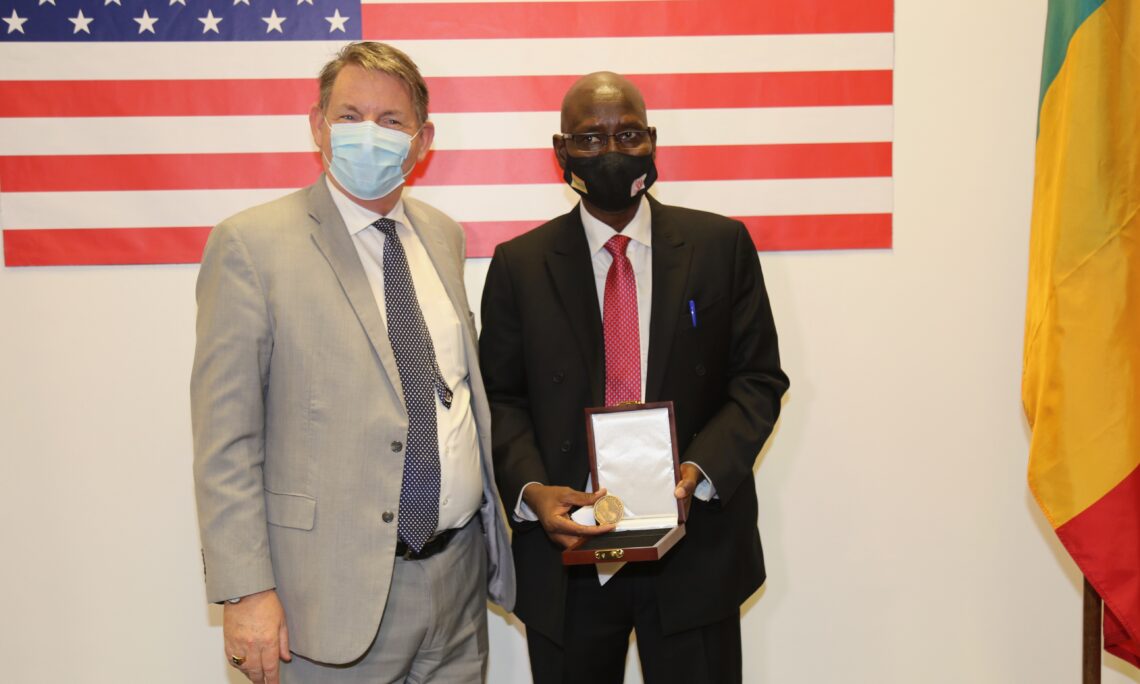 Scientific Heroes in the Fight against Tropical Diseases

Ambassador Dennis Hankins hosted Prof. Abdoulaye Djimde and Prof. Mahamadou Diakite at the U.S. Embassy to celebrate how their scientific accomplishments are helping Malians – and the world – fight tropical diseases.

Prof. Djimde’s ground-breaking work on malaria recently earned him the LePrince Medal from the American Society for Tropical Medicine and Hygiene (ASTMH).  He is the first African, and only the 24th person since it was first awarded in 1951, to win the LePrince Medal, the most prestigious prize recognizing outstanding work against malaria.

Cooperation with U.S. experts has been an important part of Prof. Djimde’s career.  He has worked closely with the U.S. National Institutes of Health, and he earned his PhD at the University of Maryland – Baltimore.  His work is recognized by the World Health Organization for helping make anti-malarial drugs more effective in saving lives, especially among children.  He is also mentoring the next generation of African scientists to build upon his work.

Prof. Diakite, the vice-rector of the University of Science, Techniques and Technologies of Bamako (USTTB), has been named as an ASTMH Fellow, in recognition of his sustained work on malaria and other emerging infectious tropical diseases.  We are proud that the strong collaboration between USTTB and the U.S. National Institutes of Health has helped his research that made him the only African out of the 28 new ASTMH Fellows named in 2021.

His work is helping the world better understand how malaria is transmitted, human immune responses to malaria, and the genetic diversity of malaria parasites.  His research topics are key to eliminating malaria in Mali and eradicating it from the world.