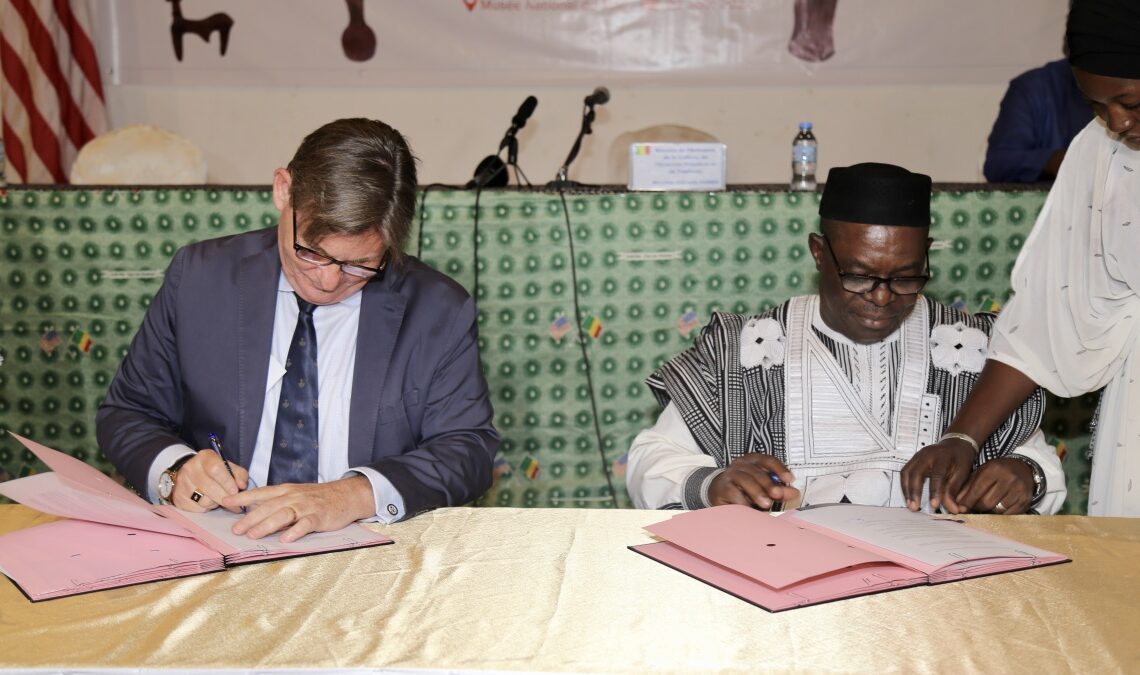 The Government of the United States and Mali enjoy excellent relations of friendship and partnership in several areas, including culture. Mali is home to important archaeological sites representing evidence of past civilizations.  They exist throughout all areas of Mali, and cover different time periods such as the Paleolithic, Neolithic, Protohistoric, Great Empire, and contemporary eras.

Similar to many countries on the continent, Mali is confronted with looting of archaeological sites and illicit trafficking, an unfortunate phenomenon which has increased as a result of the escalation of the nation’s crisis and insecurity since 2012.  Although such theft is not new, illicit trafficking of cultural property in the Sahel has taken on a particular dimension in the last five years.  The indiscriminate looting of archaeological sites, particularly of beautiful and ancient ceramics that represent the rich history of the Malian people, is alarming and becoming a serious emergency for its people seeking to preserve their histories for future generations.  Malians value their ancestral cultural traces that stretch many millennia.  A study conducted in the 1990s indicates that 80 to 90 percent of the sites in the Inner Niger Delta have been affected by looting. Some sites were totally destroyed, permanently lost to research.

Given the danger of looting and aware of the importance of heritage in the affirmation of national identity, Mali has undertaken to protect its archaeological heritage by adopting legislative and regulatory texts for the protection of its national cultural heritage and ratifying international conventions and concluding agreements.

In this way, the Government of the United States and the Government of Mali signed for the first time an agreement (an Emergency Memorandum of Understanding) in September 1993, to restrict the importation of archaeological materials from the Niger Valley and the Cliffs of Bandiagara.  Five years later, in 1997, the governments of the United States and Mali signed a bilateral treaty to extend the agreement every five years, imposing import restrictions on archaeological materials from Mali to the United States.  As a result, the accord is intended to reduce the incentive for looting and illicit trafficking of Malian cultural objects for the historical well-being of the Malian people.  This Agreement was then renewed for the sixth time in September 2017, due to its positive impact in the fight against the looting of cultural property.  To cement this bi-lateral commitment further, in August 2022, the treaty was extended for another five years.

The August 2022 signing ceremony for the renewal of the agreement was coupled with an exhibition that highlighted 200 of the 900 archaeological artifacts seized by U.S. Customs and returned to Mali under the bilateral agreement.  It featured artifacts both from scientific excavations and those looted looted from archaeological sites.  The exhibition aimed specifically to contrast the results of artifacts legally excavated and those stolen to demonstrate that the scientific approach benefits the Malian people and its history because they are better cared for and explained.  In addition, the exhibition aimed to raise Malians’ awareness to fight against the looting of their nation’s archaeological sites and the illicit sale of cultural property.  The protection and preservation of cultural heritage, therefore, is a civic duty, and the U.S. government’s cultural assistance to Mali is focused on promoting Mali’s cultural heritage.