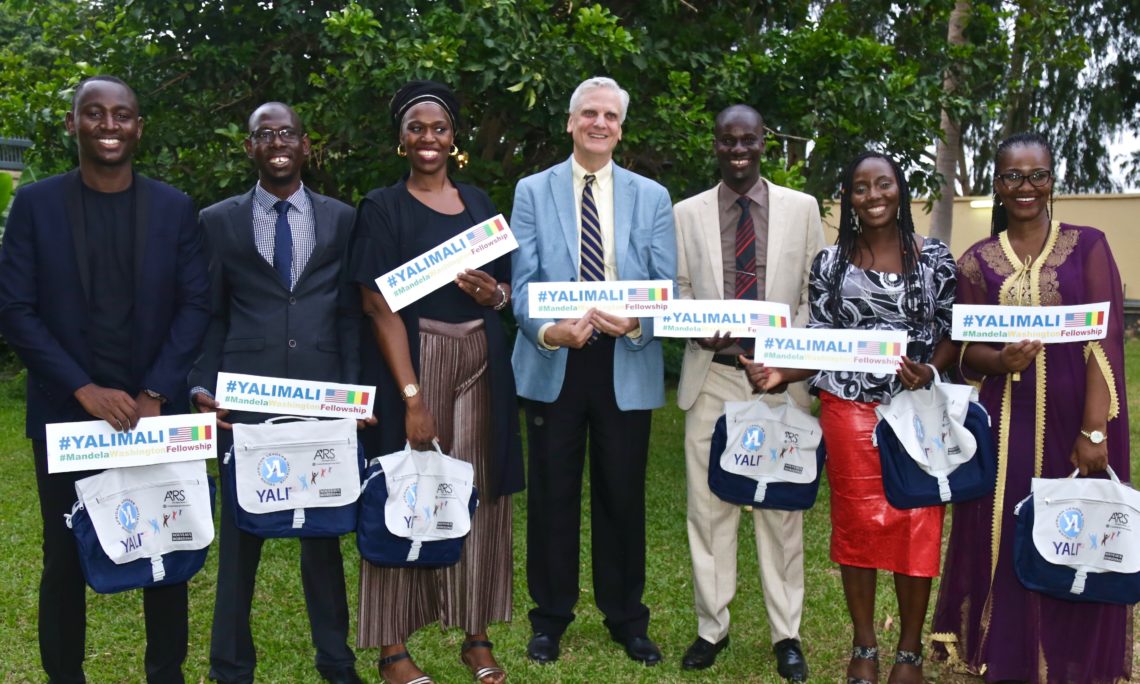 June 17, 2019 – U.S. Ambassador Dennis B. Hankins hosted Mali’s 2019 Mandela Washington Fellows (MWF) for a farewell reception in advance of their departure to the United States. The gathering was an opportunity for the U.S. Embassy to congratulate the seven fellows who will represent Mali at U.S. universities this summer. An official from the Malian Ministry of Youth and Sports Mr. Amadou Diarra Yalcoué represented the Government of Mali and conveyed his best wishes to this year’s cohort of MWF Fellows.  Other attendees included U.S. officials, U.S. embassy partners, as well as U.S. exchange alumni, including previous MWF fellows and International Visitor Leadership Program participants.

After congratulating the fellows and the alumni, Ambassador Hankins described the goals of the world-renowned MWF exchange program, emphasizing the U.S. commitment to supporting young leaders in order to ensure a prosperous Africa, and a secure a more peaceful and humane world, “Young leaders are the most valuable resource a country has, more valuable than gold and diamonds. Young people are our future, and we must train, coach and value them to make our world a better place.”

Noting the accomplishments of the alumni during the Mandela Washington Fellowship and after, Ambassador Hankins called on the outgoing fellows to benefit from the extensive network that the program provides, including connections with alumni in Mali and throughout Africa. He called on both alumni and this year’s fellows to share with peers and youth all that they gained from their experiences on the MWF, and to share the wealth by helping others to benefit from their knowledge and expertise.

The Mandela Washington Fellowship is a State Department-led exchange program that gives young leaders from Sub-Saharan Africa the opportunity to improve their skills by attending summer programs at select U.S. universities in Business, Entrepreneurship, Civic Engagement, and Public Management.

At the reception, U.S. Embassy Public Affairs Officer Wendy Barton emphasized the importance of fluent English language skills as a critical element of the criteria for a successful MWF participant. She encouraged young Malians to study English to increase their options to study in the United States, participate in U.S. exchanges such as the MWF, and to improve their prospects for employment.

The seven Malian fellows competed for during a rigorous merit-based process with over 400 candidates from all over Mali.  The seven Malian 2019 MWF fellows work in various sectors, including media, business, civil society, and sports for development.  They departed for the United States in June to participate in seven-week programs hosted at American universities.  Five fellows, Gaoussou Sylla,

Saloum Touré, Néné keita, Abdoulaye Bocoum, and Mariam Nafogou will return in early August, and the other two Malian participants, Sadya Touré and Mahamadoun Abdoulaye Traoré, will stay in the United States to complete internships after the program ends.