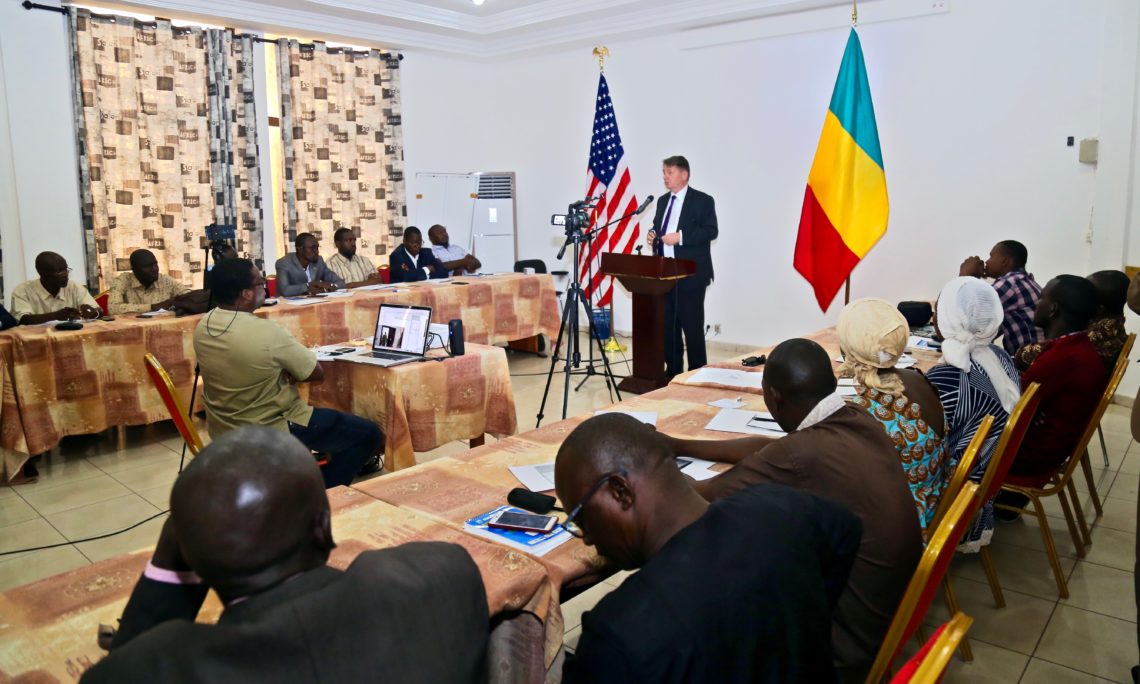 The workshop is led by journalists and U.S. exchange program alumni Noel Tadegnon and Sylvio Combey, and included material produced as part of the “YALI Checks” anti-fake news campaign, among other sources. The workshop is an initiative sponsored by the Embassy’s Public Affairs Section to counter the spread of fake news, which is exacerbating inter-ethnic tensions and dividing communities in Mali.

In his discussion with editors, Ambassador Hankins stressed that misinformation and fake news pose real threats to the trust that democracies are based on, and undermines the legitimate efforts of governments to provide services to populations.

“For a society to function well, the citizens must have access to accurate, fact-checked information.  The public must be well-informed and the society as a whole should be operating on the same set of basic assumptions,” Hankins said. “The role of editors and journalists is to assure standards are in place to help people do that.  Our challenge, then, to face the growing problem of fake news, is to give people both fact-based information, and the critical thinking tools to discern when news stories are likely false.  The more people who understand this pervasive issue, the more often audiences will commit to stopping the spread of unsubstantiated stories that can undermine communities, and are even costing lives.”  The two-day program was part of a larger workshop that also hosted radio journalists from all over Mali 22-24 May in Bamako.

U.S. Department of State’s Africa Bureau Public Affairs is supporting this workshop because it is a necessary, even critical public service to inform media professionals and citizens about the dangers of false information, and to be aware that the problem seems to only be getting worse.  As part of the U.S. Embassy celebration of International Press Freedom in May, the Public Affairs team and Ambassador Hankins wish to recognize the important work that journalist do in Mali and the critical role they play for informing the public, verifying facts, and building trust in communities