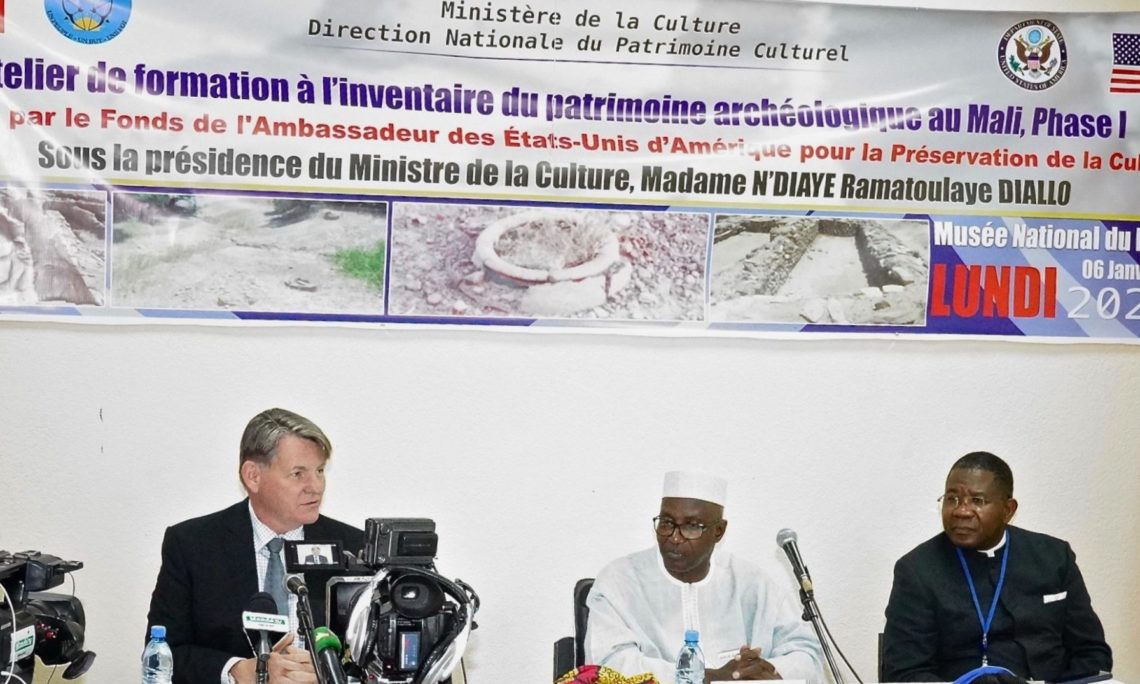 On January 6, Ambassador Dennis Hankins and Mali’s Ministry of Culture’s National Directorate of Cultural Patrimony (DNCP) launched a week-long technical training for 35 Malian archeologists and specialized technicians. The training began the first stage of a program that will create the first ever “Inventory of Mali’s Archeological Heritage” and will document location sites for archeologists and academics to continue their work in preserving the patrimony of Mali and the Niger Delta.  The project, which is funded by the United States Department of State’s Ambassador’s Fund for Cultural Preservation (AFCP) and implemented by Mali’s DNCP is creating the first inventory of major archaeological sites in the regions of Kayes, Koulikoro, Sikasso, Ségou, and Bamako in Mali.  .

At the opening, Ambassador Dennis Hankins highlighted the long collaborative relationship, “Since we signed our first bilateral cultural property agreement in 1997, the United States and Mali have been working together to preserve the unique cultural patrimony of Mali and the Niger Delta for generations to come.  This inventory will continue our rich collaboration and will reduce illicit trafficking of archaeological objects and support sustainable protection of heritage sites and collections for future generations.”

Th AFCP Inventory of Mali’s Archeological Heritage project will build capacities for academics, researchers and students working with the DNCP to record geo-locations of ancient sites to enable future preservation and knowledge sharing between archeologists.  The kick-off training included classroom lectures, group workshops, and a field component for the research teams. Groups of archeologists, anthropologists, specialized technicians in archaeological drawing, and history students participated in the training, which was led by international experts from Senegal and Burkina Faso.

The objective of the project is to have publicly accessible database of cultural heritage sites in Mali to further academic collaboration, cultural preservation, and archeological excavation for generations to come.  The United States’ Ambassador’s Fund for Cultural Preservation supports projects such as this inventory of Malian sites in order to preserve a wide range of cultural heritage around the world, including historic buildings, archaeological sites, ethnographic objects, paintings, manuscripts, and other forms of traditional cultural expression.

In his remarks, the Ambassador also highlighted the U.S. Embassy’s long history of supporting of the protection and preservation of Malian cultural heritage through the AFCP program. Notably, AFCP projects that have included documenting endangered Malian musical traditions in 2011 and preserving Timbuktu manuscripts dating back to the 12th century in 2001, 2002, 2004, and 2014.