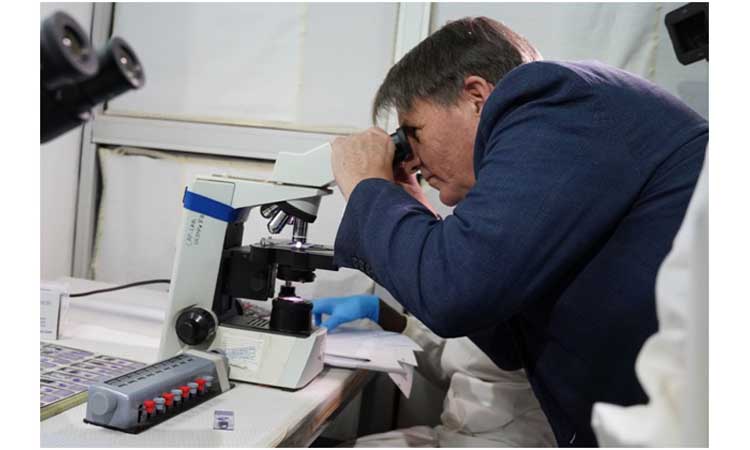 On Thursday, December 19, 2019, Ambassador Dennis Hankins participated in the 2nd Annual Medical Entomology Open House at the University of Sciences, Techniques, and Technologies of Bamako (USTTB) and visited Doneguebougou Village, where a vaccine research team launched a trial to test a vaccine that prevents mosquito infections. The activities aimed to bring awareness of entomology as a general science and to promote the fieldwork carried out by USTTB researchers in collaboration with its partners, notably the United States.

The United States and Mali have collaborated on malaria research and prevention for 30 years, having co-founded the Malaria Research and Training Center (MRTC) in 1989, which became part of the International Centers of Research Excellence (ICER) in 2001. Because of the unique and groundbreaking partnership between the United States and Mali, rates of infection have been reduced at the local level in many parts of Mali by as much as 60%.

The United States, through the National Institute of Health (NIH), has 23 laboratories on the USTTB campus and works in close collaboration with the Deans of the Faculty of Medicine and Pharmacy as well as the Rector (President) of USTTB.  The NIH’s annual budget for Mali ranges from $7 million to $12 million per year.

In his remarks, Ambassador Hankins congratulated Malian researchers on their many achievements during the 30 years of U.S.-Mali cooperation and noted that Mali is 2nd only to South Africa for malaria field research in Africa.

Following the Open House event, the ambassador visited Doneguebougou, the site of one of ICER’s eight permanent and semi-permanent clinical trial locations around Bamako, where a vaccine research team launched a trial to test a vaccine that prevents mosquito infections.