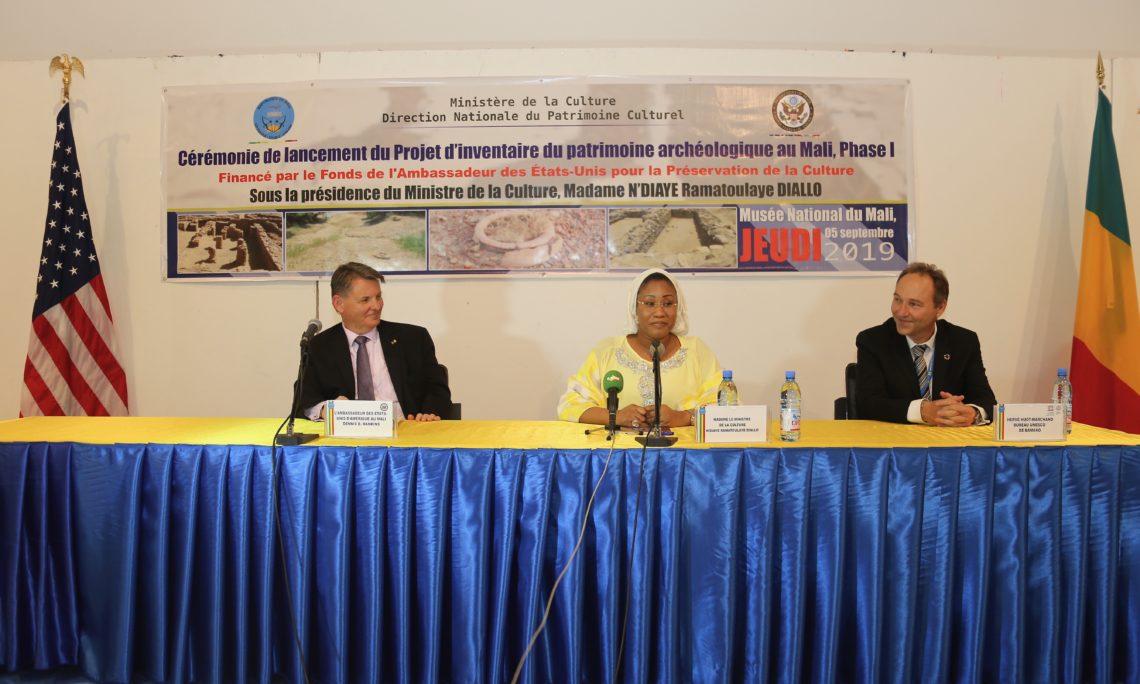 U.S Ambassador Dennis B. Hankins and Mali’s Minister of Culture N’Diaye Ramatoulaye Diallo launched a new U.S. Ambassador’s Fund for Cultural Preservation (AFCP) project in Mali at a ceremony at the National Museum in Bamako on September 5.

This U.S.-funded grant, worth $116,000, will support Mali’s Directorate of Cultural Patrimony in the creation of a national inventory and database of archeological heritage sites in Mali, forming the first phase of the Ministry of Culture’s planned efforts to develop a nationwide inventory of such sites.  The U.S.-funded Phase I will cover sites in Kayes, Koulikoro, Sikasso, and Segou regions, as well as the District of Bamako.

For over 20 years, the United States and Mali have worked together to reduce illicit trafficking of archaeological objects from Mali, and to support sustainable protection of heritage sites and collections in the Niger Delta through the bilateral Cultural Property Agreement.  This project directly supports this agreement, which began in 1997 and has been renewed every five years since that time.

Developing the inventory of antiquity sites is a much-needed step to protect the cultural artifacts and sites from the pillaging and illicit trafficking.  The effort furthers study and scholarship regarding Mali’s unique cultural, archaeological, and ethnological heritage and enables future interchanges for regional, educational, and scientific purposes.

Developing the inventory of antiquity sites is a much-needed step to protect the cultural artifacts and sites from pillaging and illicit trafficking.  The effort furthers study and scholarship regarding Mali’s unique cultural, archaeological, and ethnological heritage, locally, regionally, and globally.

The United States founded the AFCP global initiative to make lasting contributions to preserve the world’s cultural treasures from disaster and conflict. Since 2001, the Fund has supported more than 1,000 cultural preservation projects worldwide.  These projects enable the preservation of a wide range of cultural heritage, including historic buildings, archaeological sites, ethnographic objects, paintings, manuscripts, and other forms of traditional cultural expression.

AFCP has funded eight cultural preservation projects in Mali since 2001.  These include efforts to preserve medieval Islamic manuscripts of Timbuktu, protect the 14th century Kankou Moussa Mosque in Gao, safeguard the cultural patrimony of Djenne and Bandiagara, and protected endangered musical traditions and related art forms.
# # #