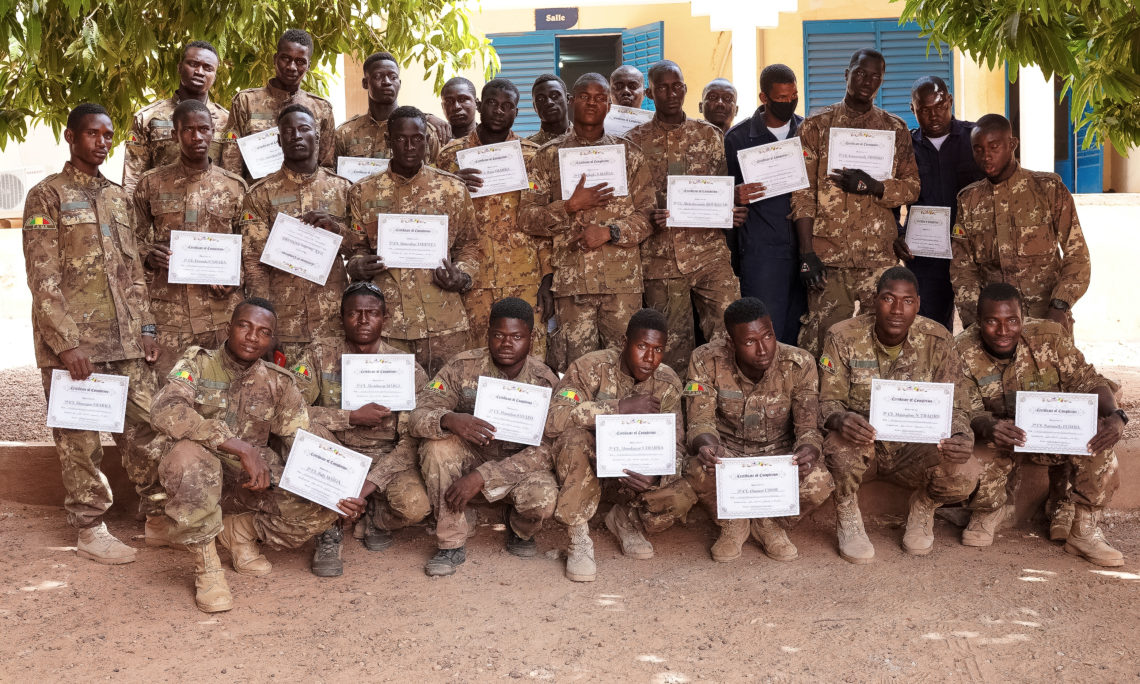 U.S. Army Special Operations Forces (SOF) soldiers from the 95th Civil Affairs Brigade completed a 4-day medical training course January 14-17 in Bamako, Mali for the Battalion Autonomes des Forces Spéciales (BAFS) troops and Malian Gendarmes, from the Groupement spécial d’Intervention de la Gendarmerie (GSIGN). The purpose of the training was to increase readiness for the Malian troops to treat trauma wounds that occur during combat, and thereby increase the chances of survival for casualties returning from battle.

U.S. Embassy’s Civil-Military Support Element Team Leader, U.S. Army Captain Ezekiel Rangel, spoke to the newly trained troops at the graduation ceremony upon completion of the course, “The U.S. military provided this combat medical training to assist our Malian counterparts with state-of-the-art medical skills that any soldier can apply in the immediate aftermath of a traumatic incident.  These medical interventions have been proven to save the lives of troops all over the world and can substantially limit the seriousness of injuries to improve the survivability of many casualties in combat conditions. I commend you all for the motivation and the efforts that you displayed this past week.”

The U.S. Army’s Civil Affairs team offered tactical combat care to give concrete life-saving skills to those soldiers deployed on the ground to assist their comrades when injured in battle.  The American soldiers demonstrated proper use of a tourniquet, occlusive dressing, nasopharyngeal airway and various wound dressings. After each demonstration, Malian troops were given the opportunity to practice with each piece of equipment on one another.

This past year, terrorist attacks have claimed the lives of hundreds of Malian Armed Forces (FAMA) across the country, including 193 between October and December, nearly all of the casualties have occurred in remote regions where medical care is difficult to obtain.

This medical training exercise is just one of the many joint military training programs that the U.S. government and U.S. Department of Defense provide to build security services’ capacities in Mali and improve the administration and readiness of the Malian armed forces.  The United States continues to partner actively with Mali and many African nations and their people to support their aspirations for inclusive democracy, peace, and prosperity.