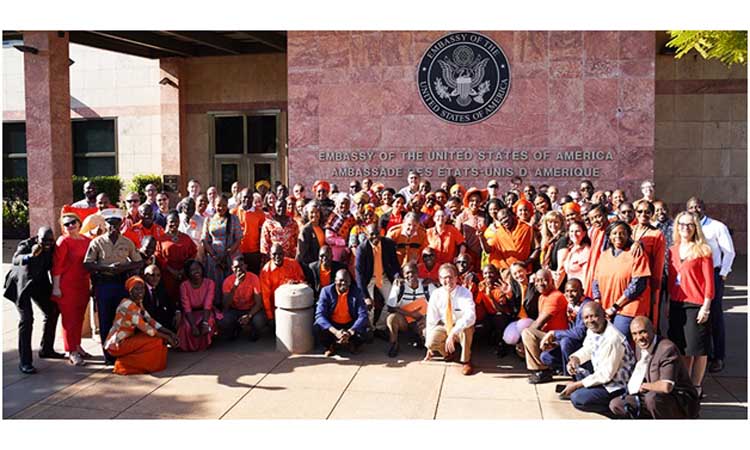 According to the Information Management System on Gender-Based Violence (GBVIMS), 2,767 cases of gender-based violence (GBV) were recorded in Mali from January to September 2019, and the latest Malian Demographic and Health Survey notes that 96% of all Malian women and girls have survived sexual violence and gender-based violence. In 93% of cases, the abuser was the current husband or an intimate partner.

In honor of the Global Campaign for Sixteen Days of Activism to End Gender-Based Violence, observed from November 25 to December 10, the United States Embassy in Mali carried out several activities and programs to highlight the global issue and to promote the rights of women and girls.

On December 2, Ambassador Dennis Hankins and the U.S. embassy staff wore orange to raise awareness about the campaign on social media. “Girls and women are often targeted directly in public and private spaces, such as homes, schools and workplaces, and prevented from going to school. It is important to show how important it is to prevent discrimination and violence against women and girls. It requires all of us to act: embassy workers, colleagues, governments, individuals, religious leaders, the private sector and civil society,” said Hankins during the photo op.

The United States Agency for International Development (USAID) organized a forum at Dar-Es Salam School in Bamako for more than 300 students, young leaders, and teachers. During the forum, participants learned about gender-based violence, its social and economic consequences on a community, and how to report acts of violence in Mali to the toll-free number 80-333.

On December 4, the American Center in Bamako welcomed dozens of young Malian men and women for a workshop to discuss the various forms of gender-based violence (GBV) as well as its causes, consequences, and potential solutions. Participants worked together to brainstorm possible actions to end gender-based violence, which included increasing penalties for perpetrators of GBV, adopting laws to promote gender equality, and involving religious leaders in the fight against gender-based violence.

To close the campaign, the U.S. Embassy’s Public Affairs Section interviewed one of the most promising young women leaders of Mali, Fatoumata Sangho, who spoke out against the Malian concept of “Mougnou ni Sabali.” The concept, Sangho explains, advises women to abide by their husbands and accept all suffering that may result from marriage. “Today, the Mougnou ni Sabali concept has lost its original meaning and now puts women’s lives in danger,” said Sangho. The video can be found on the U.S. Embassy’s Facebook page here.

Gender-based violence is a challenge in Mali, the United States and around the world. Girls and women are often subtlety and directly targeted in public and private spaces, such as in the home, schools, and the workplace, and prevented from going to school.  But the United States believes that when women and girls thrive, families and societies thrive and are more peaceful and stable. It is time to end gender-based violence and support and empower survivors. The United States is committed to doing so in Mali and around the world.