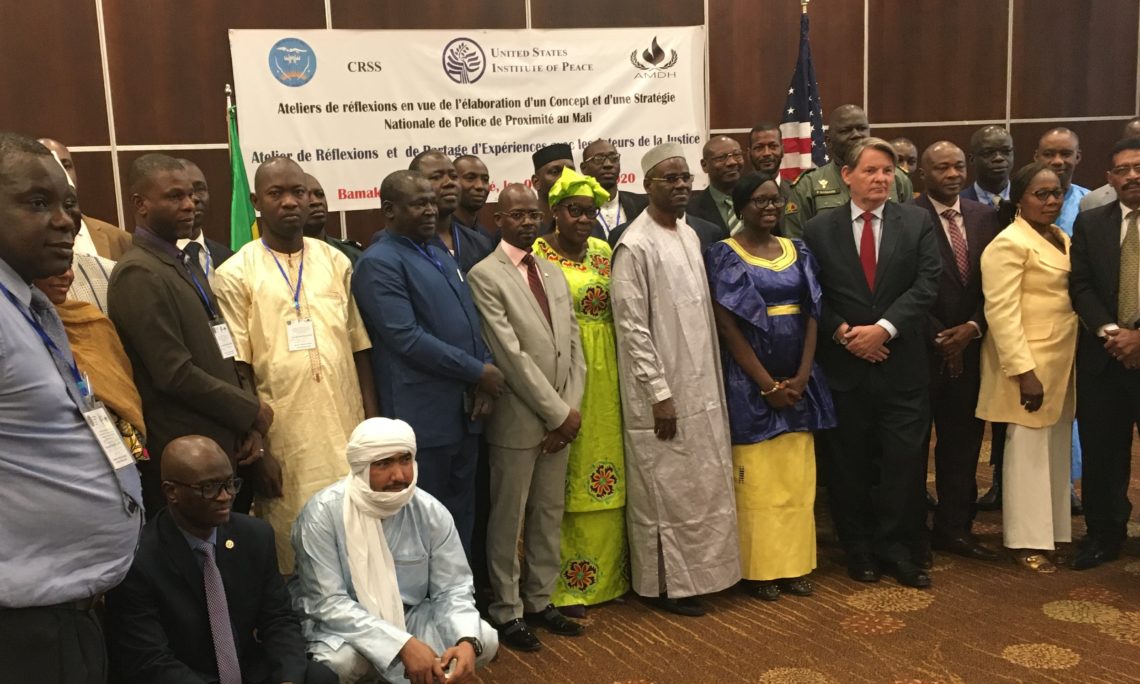 As part of its efforts to support security sector reform in Mali and promote trust and collaboration between security forces and citizens, the United States government, through the U.S. Institute for Peace (USIP) , sponsored a two-day workshop for the development of a national community policing strategy, from March 4-5 at Bamako Hotel de l’Amitié. With the support of the U.S. Institute of Peace and the U.S. Embassy and Department of State’s Bureau of International Narcotics and Law Enforcement Affairs, Mali’s Security Sector Reform Commission hosted the workshop, with the stated goal to define and develop, in an inclusive way, a national community policing strategy. This workshop falls under objective 3 of Mali’s Security Sector Reform Strategy, which identifies the promotion of trust and collaboration between the security forces and the citizenry to better achieve peace and stability. Community policing is comprised of two key components: community partnerships and problem solving.

In his remarks at the opening ceremony of Mali’s Security Sector Reform Commission’s Community Policing workshop in Bamako, U.S. Ambassador Dennis B. Hankins motioned the importance of justice and security in restoring the social contract between the political class and the population. He hoped that the community policing workshop will provide participants with the best approaches to reassure the populations that the security forces are better qualified to safeguard them than militias and armed groups.

This training was the last part of a series of five consultation workshops involving the defense and security forces, decentralization stakeholders, civil society organizations, and international partners working on the issue, as well as the justice sector. Since July 2019, all players in the sector have been working to develop a national community policing strategy in Mali. Participants in these workshops were given the opportunity to discuss the form desired for community policing, the approaches necessary to implement it, and to make relevant recommendations on collaborative security. The strategy will be translated into an action plan with a monitoring and evaluation mechanism.