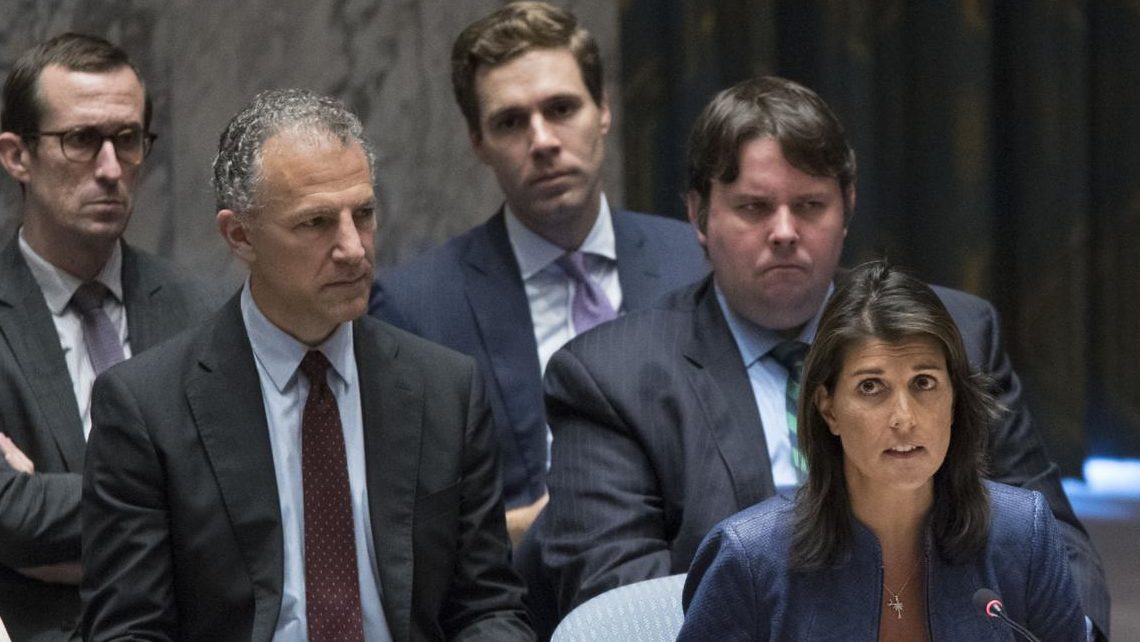 U.S. Mission to the United Nations

Thank you, Mr. Foreign Secretary, for coming to chair this very important briefing, and welcome to New York. The United States is grateful for the United Kingdom’s unwavering commitment to the fight against terrorism. You are a vital member of the Global Coalition to Defeat ISIS, and we appreciate your continued leadership on the issue. Thank you also to our briefers.

Just three years ago, ISIS was on a rampage. These terrorists seized Iraq’s second largest city and threatened the capital. In northern Syria, ISIS used its safe haven to plan attacks and radicalize new recruits. It was a threat no civilized nation could ignore.

The United States stepped up to face this challenge. We did not face it alone. We rallied a Global Coalition to Defeat ISIS, a partnership of like-minded states and organizations to confront this evil. Our ranks grew and this Global Coalition now counts an incredible 77 members.

Together, we have made significant progress. Iraq was able to declare its territory liberated of ISIS. The Coalition has driven ISIS out of much of its former territory in Syria. But this fight is not over. A committed core of ISIS fighters remains in Iraq and Syria. They are a resilient enemy, so we must remain vigilant. After coming so far, we do not want to give ISIS room to re-group. Our hard work will continue to make sure that ISIS faces an enduring defeat.

That is why we are working with our partners to help the victims rebuild. In Iraq and Syria, our Coalition partners have been clearing rubble, defusing mines, and restoring electricity and other services.

This has allowed 150,000 Syrians to return to what used to be the ISIS capital of Raqqa since the city was liberated. This work will continue for some time thanks to the generous contributors of approximately $300 million in new stabilizing funds. We welcome the leadership of these partners in stepping up to address these challenges. Our shared contributions show the enduring strength of this Global Coalition.

But, sadly, defeating ISIS in Iraq and Syria will not be the end of the story.

As we have heard, the hateful ideology of ISIS has taken root in new corners of the world. Places like Afghanistan, Nigeria, Libya, Somalia, and the Sinai. The lesson here is that ISIS is an enemy that adapts and one that will seek out the world’s ungoverned spaces. We must deny ISIS safe haven.

In many of these places, that means putting real pressure on parties to end conflicts that have dragged on for years. We need to focus on building up state authority and extending the reach of institutions, so ISIS doesn’t have the breathing room to expand and plot new attacks.

We also cannot forget the enduring threat posed by al-Qa’ida. ISIS may have captured more headlines in recent years, but al-Qa’ida leaders are still plotting attacks around the world. This includes a large remaining al-Qa’ida presence in Syria, Yemen, and other parts of the world.

The future of our fight against terrorism will look different from the challenges that came before. Our enemies no longer control large pieces of territory spanning multiple countries. They are hiding in the shadows, or in places where governments hide them or look the other way. These terrorists never stop looking for new opportunities, so we cannot let our guard down.

We know the tools that will be critical in this fight. The United States led the way in negotiating the Security Council Resolution 2396, which sets the highest standards for states to disrupt the travel of foreign terrorist fighters. Every Member State must implement this resolution in full to break up the routes that terrorists use to get from one battlefield to another.

That means making sure that Member States use and share the latest technology, like passenger name records, watchlists, and biometrics, to identify threats trying to cross our borders. Screening all travelers with these tools is an essential step.

Member States need to come up with strategies to address fighters who may try to return to their homes.

As one of our briefers mentioned today, it’s not just men who may have tried to join terrorist groups, but women and children as well. Under Resolution 2396, every government must focus on a comprehensive plan to prosecute, rehabilitate, and reintegrate foreign terrorist fighters and their families.

We also must make full use of our sanctions regimes to deny funding to terrorist groups and the entities that continue to support them. Where force is necessary, the United States will deepen our longstanding partnerships with countries fighting terrorism.

Above all, we will never hesitate to act to protect the American people from the threat of terrorism.

So today, while we look back at the campaign against ISIS, we must prepare for tomorrow’s challenges. We must maintain our resolve, and we will prevail. There is no doubt about how this story will end. The forces of terror will never win. The fight against terror will take different forms, but the outcome is certain. The United States will continue to be a force in this effort against ISIS and al-Qa’ida until we defeat this threat.