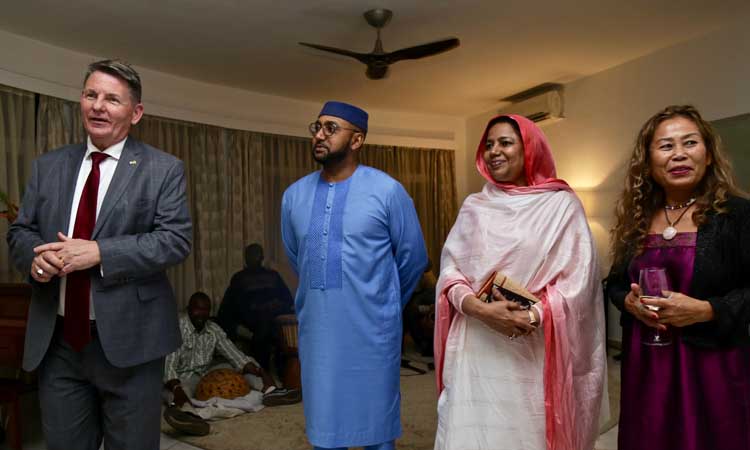 March 18, 2019: Ambassador Dennis B. Hankins hosted a welcome reception at his residence that gathered over 60 representatives from foreign diplomatic missions in Mali, the Malian government, international organizations, Algiers Peace Agreement signatory movements, and the Embassy community. The reception allowed the Ambassador to begin building connections with key national and international players that he will work with over the course of his mission in Mali.

A particular focus of the event was recognizing those who are advancing cooperation between the United States and Mali. In his remarks, Ambassador Hankins highlighted the United States’ continuing engagement in support of the three D’s: Defense, Diplomacy, and Development.  He emphasized the United States’ enduring commitment to supporting the implementation of the Algiers Peace Agreement and working to ensure that Mali is peaceful and prosperous.

His remarks were complimented by live music from the U.S. Embassy band.

On behalf of the Malian government, Ben Barka, the Secretary General of the Malian Presidency, welcomed Mr. Hankins to Mali. He thanked the international community for their engagement and their efforts to support a stable Mali since 2012. He expressed his condolences for all those soldiers killed in the recent terrorist attack on the Malian Army camp in Mopti, and encouraged partners to continue working to build peace in Mali.

The Ambassador’s remarks and Ben Barka’s statement were positively received by guests.  Certain guests, including Malian government officials and peace agreement signatory movements, perceived it as positive signal for bilateral cooperation between the United States and Mali.

The reception followed the Ambassador’s arrival in Bamako on March 14 with his wife Mira Hankins and the presentation of his credentials to His Excellency President Ibrahim Boubacar Keïta on March 15, 2019.