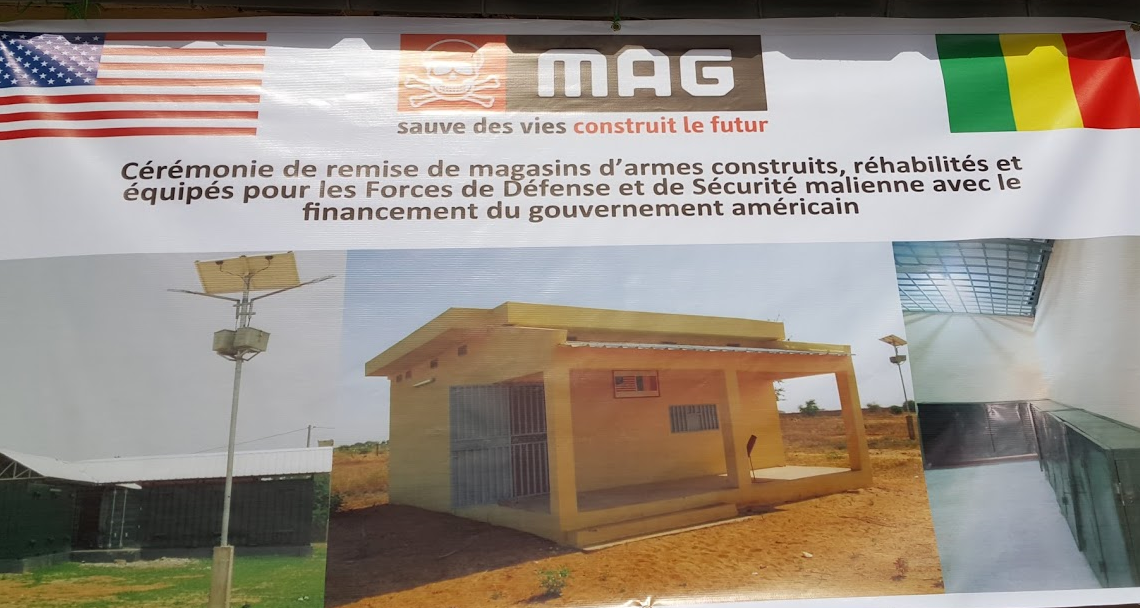 Tuesday, 27 February 2018 – U.S. Ambassador Folmsbee handed over the keys for 22 armories in Segou, Mopti, and Bamako, constructed for the Malian Armed Forces, Customs and Police. The project for the construction of the physical security facilities and training of personnel, was sponsored by the United States and implemented by NGO partner, Mines Advisory Group (MAG). The goal is to prevent the illegal and dangerous proliferation of weapons and munitions in Mali.

In his remarks, Ambassador Folmsbee recognized the challenges faced by the Malian Armed forces and noted that “preventing terrorists and criminals from having access to arms and munitions is a critical objective in the efforts to maintain stability and secure peace in Mali and across the Sahel.” The Ambassador indicated that the latest project in the partnership began in January 2018 with an investment of $250,000 to construct and refurbish weapons storage facilities and provide training that assists the Water and Forestry Direction of Sikasso and the Police of Bamako. A component of this year’s project includes MAG’s training Malian security personnel on how to destroy obsolete ammunition and unserviceable weapons. These activities will assist in reducing the risk of accidents and proliferation that can lead to devastating humanitarian effects.

In 2017, the United States invested $740,000 in these facilities and training programs for the Malian forces in order to deter the illegal proliferation of weapons. This project builds on the work that the partnership accomplished in 2016, for $ 750,000 that included the construction and refurbishment of 15 weapons storage facilities for the Army in Kati and Sikasso, and the Police in Bamako, securing thousands of weapons. These projects underscore the United States commitment to supporting the Malian government in their efforts to improve security and stability at both the  regional and national levels.